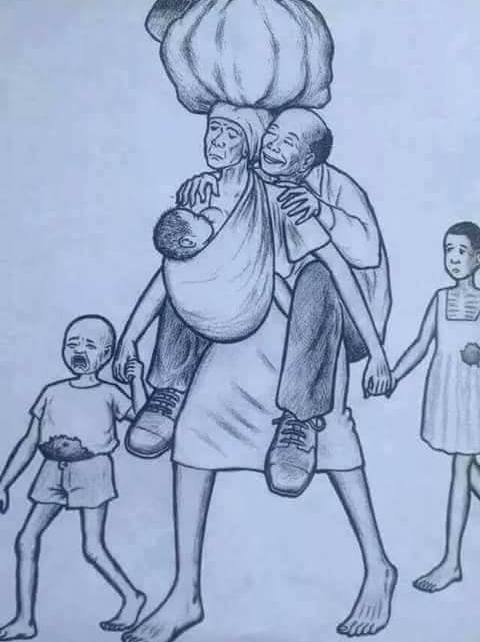 Mali stood, hand akimbo, leg closed, she relaxed her head and shoulder on the wall as she watch the nurse worked on Ajah’s wound, she hard her say that the wound is not deep and she gave him pain killer and other tablet, after which the nurse later left,

she felt pity for him, she wasn’t happy that Ajah sustained injury from the fight but she was angry with him for raising a hand at her, she watch him changed the TV channels and he noticed that someone was watching him from behind and turned

“why are you standing behind me like a tree, wicked being, you are looking for how to come and finish what you started? Just count that day as Christmas for you, with the remaining day, if you ever try such again with me, Laju will come and carry your Corp…he will come and take your dead body home, you don’t even have human feeling, how could you have such an evil mind and stone me with that iron spoon…what if the injury was more than this Mali….you are so heartless..”

Mali was still standing there watching him talk, she was tempted to reply him but looking at him the wound on his head is enough it will remind him not to mess with any kind of woman,

“Ajah, stop the threat, your word is an empty cymbal, you better mind your mouth too because next one will be on your mouth and that your nurse will finally sew it up, you won’t be able to rant again, anyway, I’m a nice person I just hate people messing with me, what should i make for lunch… To show you i can actually cook, but i don’t just like cooking…

Ajah smiled mischievously and made a mocking sound as he focused on the TV, Mali asked him again gently as she walked to one of the cushion and sat down,

“please go and do your stupid cooking and leave me alone, cook your tasteless food and eat alone, you are looking for who to kill, I’m not available, and stop acting as if you are a good person because you are not even close, you are a poisonous venom…

“I’m trying to be nice and you are still insulting me, hmmm, when I’m good you are insulting me when I’m bad you are still in my case, what exactly do you want, or are you so confuse you don’t know what you want? Anyway I’m trying to be at my best today, I don’t want to fight, you brought this on your self by raising your hand on me, is that the way you hit Lili, wait..so you slap and beat your wife when you are being provoked…Lili has taken enough, I can see that…i would have dumb your wretched ass at the bin if i was Lili, file for divorce and take custody of my kids, you can’t be poor, useless and wicked at the same time, your wife must have had enough for her to have agreed to be away from you, Lili is a very patient person, I will ask her where she got her strength from, because majority of women, me being number one of them can’t do half of what she’s doing, and instead of you to help out in every way you can since you are too lazy to work, and koboless too, you will be forming “I’m a man” parading your wretched self like a mosquito, who do you even think you are..

Ajah listened to Mali and became scared of Lili leaving him, what if Mali was right, what if Lili was planning to leave him and take the kids, what will he do without her, Mali insult wasn’t getting to him he was thinking what she said about Lili, he wanted to change for the better and change for her for real, he doesn’t want to work for anybody and Lili is indebted because of him, he has to put his pride aside and get a job, he has few people he can call and places he will summit his CV, he stood up and rushed to his room surprising Mali who was still talking

Mali was shock to see him rush into his room, she thought he probably wanted to get a weapon to come and hurt her, she stood up and and went to the kitchen and carried the same iron spoon she used to stone him, she came to the sitting room holding her weapon, standing and waiting for Ajah to bring his, she will break that his hand before he can get to her, she stood and kept waiting and Ajah was taking forever to come out, she became scared what if is a gun that Ajah was bringing to shot her…what will she do, she wanted to go and hide before Ajah comes out, just as she tried to rush to hide Ajah came out with files and phone in his hand, on seeing Mali with same iron spoon trying to rush out he burst out laughing, the file in his hand fell down as he laughed and held his head, Mali couldn’t hold herself as she saw Ajah with papers, files and his phone instead of the expected weapon,

she joined in the laughter, they both sat on the floor and laughed and when they were stable Mali told him that she thought he wanted to get a gun or something to come and hurt her that was why she carried her own weapon waiting for him,

they started laughing again, Ajah told her he only went to check for his credentials and make some calls concerning work, he wants to be a better husband for Lili and theirs an opening in a big pharmacy, he will go there tomorrow, Ajah told her how her insults has make him changed his mind, “truly Lili has being a God sent to me and i will make sure that I makes it up to her,

Mali talked about herself and Laju, she said as much as she want to be a better wife but she doesn’t really like stressing herself, but this few days has made her appreciate her husband more, “he is one of a kind, she said.

“Our spouse has being very accommodating, taking our trash like theirs and we still don’t appreciate them, I’m beginning to have a better thought now, “seriously Ajah, if i go back home I’m getting myself occupied with something, I will make my own money and support Laju, he is indebted because of me, how ungrateful I am to have suffered him the way i did, he was obviously tired that was why he quickly agreed to let me go with this plan, I was hoping he will be the one coming to beg me but I’m begging him now to come and get me, I miss him and our kids, I will try my possible best to be a good mother and a good wife too, Cassy is enjoying her marriage with Frank because there’s always mutual understanding between them, I want the same with Laju, we are deserve to be with somebody that values us,

“but Mali do you think Lili will ever forgive me for what i put her through?

“we can only try to earn it by being a better and caring person as they have always being to us, I will work on my pride and support him the best way i can, I’m not ashamed to say that, they both deserve better, look at how troublesome we have being to each other, getting on each others nerve, just this few days, that’s exactly what we have being giving our Laju and Lili, who have forgiven, ignored and overlooked our fault for 8years, there’s a limit they can take, I’m sorry to have broken your head and I’m glad we are talking like normal humans now, but don’t raise your hand on any woman, is very wrong Ajah,

“you are right, I’m equally sorry, your insult cut through me Mali, and every word you said was actually true that was why it hurt me so bad, all was true except me being ugly, I’m a handsome man except if you can’t see clearly, well, I don’t mean that as an insult, don’t get back at me ”

They laughed again as Mali went to make lunch while Ajah sort through his file as he keep making calls concerning any more vacancy available in his field of study.

Judas in the church – episode 28