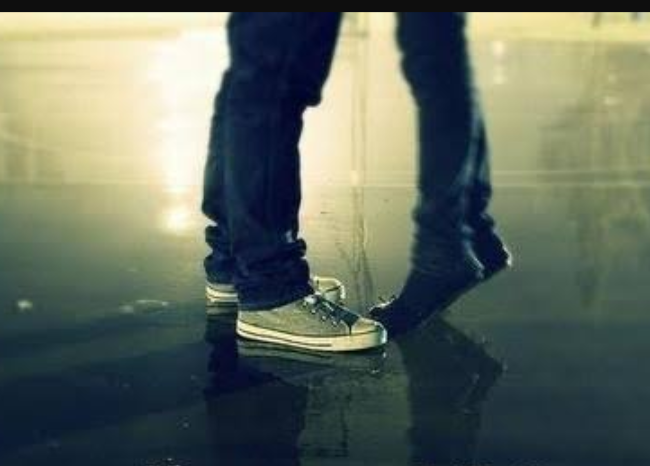 On hearing Roland’s name from his secretary’s lips, Kelvin was shocked and kept wondering how Roland got his office address and why he came visiting. There’s no confrontation as scary as that of two guys in love with the same woman. Kelvin asked his secretary to repeat the name again, just to be sure he heard right the first time.

“Who do you say is here to see me again?” Kelvin asked, “Sir, his name is Roland” his secretary repeated, “Did you enquire his reason for visiting?” He asked, “He said it’s confidential” his secretary replied.

Kelvin told her to let him in and sat up in preparation for anything that was about to go down. Few minutes later, Roland walked in with a faint smile on his face, “Nice office” he said and Kevin thanked him for the compliment. “Why are you here? Can I help you” Kelvin enquired, “Yes, you can help me by first walking away from Sharon’s life” Roland said. Kelvin chuckled and shook his head, “Don’t tell me you wasted your time to come here just to tell me this, because if you did, then it just shows how jobless you are. Please if you don’t have any better thing to say, then leave my office because you can clearly see that I have work to do”.

This was the first time in Roland’s life that someone stood up to him. Indeed, he knew deep down that he had lost Sharon for good because Kelvin was really a man to die for. Roland didn’t want to back out too soon, so he tried further. “What can I give you in exchange for Sharon, she was the only woman that ever genuinely loved me. You’ll be doing me a favour by letting her go and I’m willing to pay, if that’s what it would take for you to grant my request” Roland said.

For a minute, Kelvin felt for Roland but it wasn’t that of pity, but that of the fact that he let a precious jewel like Sharon slip out of his hands. “It baffles me that you think love can be bought or sold. I know you’ll get hurt for what I’m about to say, but I just have to say it anyways; Thank you for not appreciating what you had, thank you for showing her less love and care, and thank you for letting her go. I’m saying thank you because, it was due to all these things you did wrong that I’m able to have Sharon today. She’s the best thing that has happened to me in a long while and I’m never letting her go. There’s no price tag on her, so she’s not for sale” Kelvin said.

Just as they were still talking, Sharon walked in on them and almost dropped dead when she saw Roland there. She kept thinking of what Roland was doing in Kelvin’s office, “What’s going on here?” She confusingly asked but no one replied, as they didn’t know where to start explaining from.

The atmosphere was tensed and felt awkward. Before Sharon could utter another word, Roland got up to leave, “Think about it” he said to Kelvin and left.

Sharon was confused and wanted to know what was going on. “Think about what?” She asked but Kelvin didn’t know where to start explaining from. “Baby it’s ok, don’t get yourself worked up” Kelvin said but Sharon refused to let go and demanded explanation, “Ok I’ll explain, he came here to tell me to leave you for him” he said. Sharon felt offended and thought Roland had crossed his boundaries by coming to her man’s office to make awful offers. “He’s probably deranged and thinks I’m his property. What gives him the right to go around confronting people and telling them to leave me, all this has to stop!” She furiously said.

Kelvin tried to calm her down but she was still very much offended. “Baby listen, there’s absolutely no reason to get upset. Just let him be, he needs time to fully realise that you’re no longer his. You have me and that’s all that matters” Kelvin said.

His words melted Sharon’s heart and calmed down her temper. Kelvin left the office with her to a nice place, just to cheer her up. They had fun before parting ways.

All through the remaining hours of that day, Sharon was still a bit upset for what Roland did and thought about it occasionally. She arrived home and kept contemplating on what to do to put an end to Roland’s constant unexpected visits. She decided to pay him a visit at his house that night.

Roland was lying on the parlour couch when she walked in. He had a sad countenance and was shocked when he saw her. “Sharon! What are you doing here?” He surprisingly asked, “I want us to talk” she said. Roland sat up and told her to go ahead that he was listening.

Sharon looked into his eyes and didn’t know when tears fell off her eyes, “why are you crying” Roland asked. Sharon took a deep breath and said “I’m here to tell you to let go of me and move on with your life. I’m happy with Kelvin and wish you every beautiful thing this life can offer, I forgive you for everything you did to me and want you to forgive yourself too. There are so many other ladies you can have a beautiful relationship with, so let go and move on” she said with tears in her eyes.

Roland starting tearing up and wiped his eyes with his hand. “I love you so much and you are irreplaceable. I hate myself for everything I did to you, and I’m glad you’ve forgiven me. I wish you all the best too and would always be here whenever you need anything. I’m sorry for invading your privacy and also going to Kelvin’s office, I was just losing my mind and didn’t know what else to do. I would always love you Sharon” he sadly said.

It was an emotional moment for them but it was sad that things had changed and there was nothing either of them could do about it. Sharon left afterwards and was happy that she had that conversation with Roland. She felt relieved!

Immediately she got home, she happily picked her phone and called her sweetheart. “Hello baby” she happily greeted, “Hi honey, why so happy?” Kelvin asked and Sharon laughed, “I’m happy because I have an awesome man in my life who appreciates and loves me” she said. Kelvin chuckled and told her that he can’t wait to marry her because she always put smiles on his face. “I can’t wait too” Sharon said and they said goodnight to each other before ending the call.

Their relationship waxed stronger and they never under-valued or under-appreciated the efforts of each other, not even for a single day.

Most times, we tend to think that there are many fishes in the ocean and this mentality might make us treat the people that love us carelessly, but remember that every creature or person is unique and has no exact replica. You might get another person to replace the one you treated carelessly but the difference will always be clear, especially if they loved you genuinely and you hurt them.

Appreciate the people you have in your life today because they could be gone tomorrow. Regret is not a sweet thing so try the best you can to never experience it.

End of story!
Thanks for staying tuned till the end, comment below if you want another story. Love you all.

DIAMOND IN THE FOREST (episode 1)

The story of us episode 17

In Love With The Hijabite – Episode 16

My mind as a teenager – episode 20