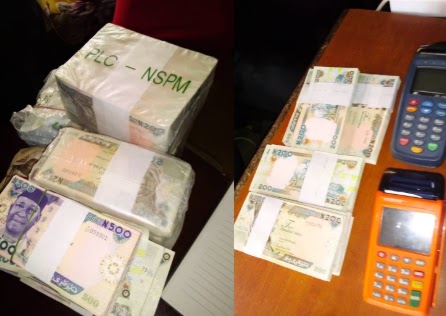 Men of the Lagos State Police Command in collaboration with Central Bank of Nigeria and other sister security agencies raided markets within Ikeja and environ where Nigerian currency is illegally traded. A statement from the command’s spokesperson, Bala Elkana, says the operation was carried out on Friday 12th and Saturday 13th July, 2019.

According to Bala, a cash sum of Two million, four hundred and forty thousand, five hundred and fifty Naira (#2,440,550.00) mint of different denominations, used in the illicit trade and other exhibits were recovered.

Investigation is ongoing to ascertain the source of the mints currency.

Bala added that the suspects will be charged to court under section 20 and 21 of the CBN Act 2007. He stressed that it is a punishable offence under the CBN Act, for any person or group of persons to hawk, sell or otherwise trade in the Naira notes, coins or any note issued by the Central Bank of Nigeria. Upon conviction the offenders will be liable to imprisonment for not less than six months or a fine not less than N50,000 or both.

Read Also: Violence: Why there is anger, fear in Kaduna –Bishop

”It is important for members of the Public to note that, acts of spraying the Naira notes at occasions, soiling and writing on the Naira, squeezing the Naira, as well as hawking and selling of the country’s currency notes, are abuses of the naira and are punishable by law.
We all have a duty to protect the Naira as our currency forms part of the symbols of our national identity. The Command thereby, appealed to the General Public to report any person or group of persons seen abusing the Naira to the Police or any law enforcement agency” the statement read