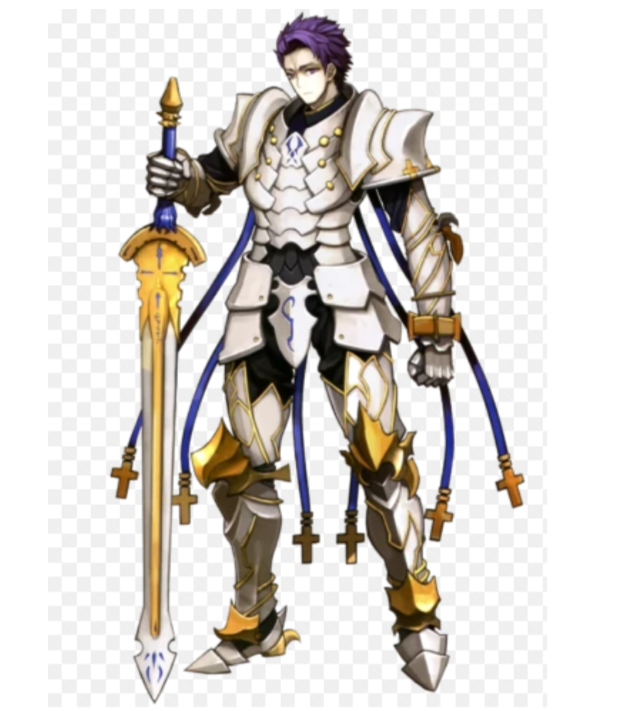 In the one which Gwen had chosen, lay upon a velvet cushion, a small golden crown, and a sceptre: in Lancelot ’s, a large needle, and a little linen thread. The King commanded both to bring their caskets before him: he took the little crown from the cushion in his hand, and, wonderful to see! it became larger and larger, until it reached the size of a real crown. Placing it on his son Gwen , who kneeled before him, he kissed his forehead, and bade him sit upon his right hand. To Lancelot , however, he turned and said:—

“There is an old proverb, ‘Shoemaker, stick to thy last;’ it seems that thou shouldst stick to thy needle. Thou hast not, indeed, merited much mercy at my hands, but one has supplicated for thee, whom this day I can refuse nothing; therefore give I thee thy paltry life; but, if I may advise, haste thee to leave my land.”

Ashamed, ruined as he was, the poor tailor could answer nothing: he threw himself before the prince, and tears came into his eyes.

“Can you forgive me, prince?” he said.

“To be true to a friend, magnanimous to a foe, is the pride of the Good King !” answered the prince, raising him. “Go in peace!”

“My true son!” cried the old King , deeply affected, and sinking upon Gwen ’s [email protected] The emirs and bashaws, and all the nobles of the realm, arose from their seats, to welcome the new prince, and amid this universal jubilee, Lancelot , his chest under his arm, crept out of the saloon.

He went down into the King’s stable, bridled his horse Protius , and rode forth from the gate towards Alexandria. His whole career as prince recurred to him as a dream, and the splendid chest, richly adorned with pearls and diamonds, alone convinced him that it was not all an idle vision. Having at last reached Alexandria, he rode to the house of his old master, dismounted, and fastening his horse to the door, walked into the workshop. The master, who did not even know him, made a low bow and asked what was his pleasure: when, however, he had a nearer view of his guest, and recognised his old Lancelot , he called to his journeymen and apprentices, and all precipitated themselves, like mad, upon poor Lancelot , who expected no such reception; they bruised and beat him with smoothing-irons and yard-sticks, pricked him with needles, and pinched him with sharp shears, until he sank down, exhausted, on a heap of old clothes. As he lay there, the master ceased, for a moment, from his blows, to ask after the stolen garments: in vain Lancelot assured him that he had come back on that account alone, to set all right; in vain offered him threefold compensation for his loss; the master and his journeymen fell upon him again, beat him terribly, and turned him out of doors. Sore and bruised, he mounted Protius , and rode to a caravansery. There he laid down his weary lacerated head, reflecting on the sorrows of earth, on merit so often unrewarded, and on the nothingness and transientness of all human blessings. He went to sleep with the determination to give up all hopes of greatness, and to become an honest burgher. Nor on the following day did he repent of his resolution, for the heavy hands of his master, and the journeymen, had cudgelled out of him all thoughts of nobility.

He sold his box to a jeweller for a high price, and fitted up a workshop for his business. When he had arranged all, and had hung out, before his window, a sign with the inscription, Lancelot , Merchant Tailor, he sat down and began with the needle and thread he had found in the chest, to mend the coat which his master had so shockingly torn. He was called off from his work, but on returning to it, what a wonderful sight met his eyes! The needle was sewing industriously away, without being touched by any one; it took fine, elegant stitches, such as Lancelot himself had never made even in his most skilful moments.

Truly the smallest present of a kind fairy is useful, and of great value! Still another good quality had the gift; be the needle as industrious as it might, the little stock of thread never gave out.

Lancelot obtained many customers, and was soon the most famous tailor for miles around. He cut out the garments, and took the first stitch therein with the needle, and immediately the latter worked away, without cessation, until the whole was completed. Master Lancelot soon had the whole city for customers, for his work was beautiful, and his charges low; and only one thing troubled the brains of the people of Alexandria, namely, how he finished his work entirely without journeymen, and with closed doors.

Thus was the motto of the chest which promised fortune and wealth undergoing its accomplishment. Fortune and Wealth accompanied, with gradual increase, the steps of the good tailor, and when he listened to the praises of the young King Gwen , who lived in every mouth; when he heard that this brave man was the object of his people’s pride and love, the terror of his enemies; then would the quondam prince say to himself, “Still is it better that I remained a tailor, for Honor and Fame are ever accompanied by danger.”

Thus lived Lancelot , contented with himself, respected by his fellow-burghers; and if the needle, meanwhile, has not lost her cunning, it is still sewing with the everlasting thread of the good Fairy Mistletoe .

THE END (Pls help us by using the comment box below, thanks)

Memoirs of A Lagos PLAYBOY Episode 13

In One Night episode 6 – end

As We Pray (Short Story)