Luna in my Home – episode 1 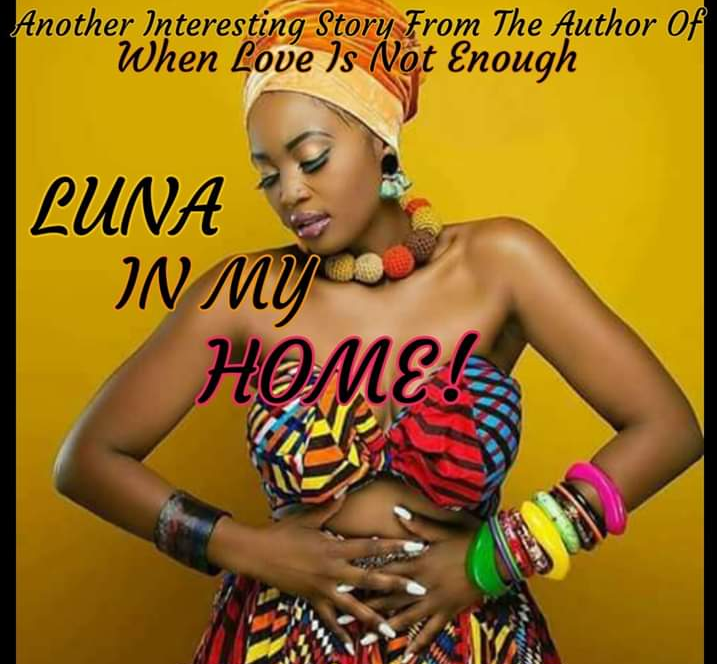 LUNA IN MY HOME.

Another intriguing story from the author of my Colorless Rainbow

I woke up that morning to get ready for work, it has become a ritual for me. A normal routine that I indulged every day.

My wife was still in bed beside me.

I knelt down and say few prayers before heading to the bathroom to freshen up.

Within fifteen minutes I was ready for work.

I checked on my wife she was still in bed.

For some days now she has being acting cold. I usual come back to meet dinner but there was no dinner on the dining table when i returned yesterday or even a day before.

When I came back from work yesterday, our two kids had already gone to bed, it wasn’t unusual. Sometimes I don’t get to be with them until weekend. My darling wife, the woman I love so much was not on her usual self. I thought it was one of all those her mood swings that she normally have and whenever I ask her what is the problem she will tell me that she was alright and just tired from chores.

I was also tired when I returned yesterday night. All I wanted to do was to eat, freshen up and go to bed. I refused to pay any attention to her moods or her attitude.

When I did not see my food on the table, I went to the kitchen and quickly made a cup of tea which I took with bread and by the time I was done, she was deeply asleep.

I did not think of her cold attitude last night, I went straight to bed and it was a matter of few minutes before I slept off too.

This morning again, waking up she was still lying down there without turning to look at me or to show those her caring attitude that I enjoyed so much.

After getting dressed, I called her name to inform her that I was leaving but she did not respond.

No reply came. I moved closer to her and try to touch her but she pushed my hands away and turned her face to the other side of the bed.

Whatever is wrong with her is definitely not from me because I made sure I provide everything for her and our two kids. Anytime she said she wanted something I will try and make sure she gets it. Even if is just half of it but I will try as much as possible to provide it for her.

I work so hard for my family, to give them everything they ask for. My wife doesn’t do anything except to take care of the house and also the kids.

If something is bothering her or she needs money, all she needed to do was to speak to me about it not putting up ill behaviour in other to get it. I will keep ignoring her until she is ready to tell me whatever her problem is.

I left her and went to the kid’s room. i quietly checked on them while they were still sleeping that early morning.

I picked up my car key and my back pack before moving out to my car.

I left the house 5:30am that morning. Is my normal time of leaving so that I can beat traffic and arrive early to the office. I got to the office by 7: 49am.

As one of the managers in my company, I have to live by example. I normally arrive first before some of the staffs. The office cleaner is mostly the only one that arrives by 7am in the morning to clean the whole office. Our normal resumption time is 8am and a grace of 30minutes which makes it 8:30am.

I’m both the marketing and logistic manager to my company and my post requires a lot of traveling. I travel to different state when the situation arrives.

I make sure I don’t spend so much time on the road in order to be with me my family.

During the weekend, I spend quality time with them and even take them out for fun.

Whatever is making Bisi to act up then she alone knows.

I started with my usual office work that morning and it was within the day I decided to call my wife to check on her and the children.

Her response was discouraging and cold, she threw few words to my ears “we are fine” and ended the call immediately. I was running out of patient with this attitude of hers but I maintained my cool and carried on till the rest of the day.

My friend Aram called me out after work. Me and Aram use to chill out after work at a close by beer parlour and have few bottles before heading home. We play snooker and even enjoy some football gist with few other men who also stopped by on their way home from work.

I don’t drink much but the thought of going home to my overbearing wife kept me outside sometimes.

Today, I told Aram that I won’t be able to join and chill out. I have to get home earlier.

I entered the road and started driving home, the traffic was building up again as usual. I followed it as it flows.

Different thought crossed my mind on what could be Bisi’s problem while driving home that evening.

She couldn’t have known about my affair in Abuja. It was a secret and a mistake I try not to repeat.

It has been over three weeks already that it happened right in my hotel room at Abuja. When I travelled for work. My office takes me round the country, and I enjoy my work and have been with the company even before I got married and had kids. Is been ten years I joined my company and I’m their head of logistic and also a marketing manager.

As I travelled that last month and was sitting out at the hotel lounge with my beer and laptop, working. I looked up from my laptop and saw this beautiful lady sitting alone with a cocktail drink and her legs were crossed in a fashionable and admirable style. Her fresh fair thighs were exposed, she was on a small tight gown and was busy with her phone.

I couldn’t take my eyes off her. I try to concentrate back to work but I kept stealing glances at her. She looked in my direction and later looked away.

Maybe she was waiting for somebody, it could be her man or she was just chilling out alone. I thought within me.

I couldn’t concentrate at work I decided to move to where she was sitting.

We got talking and that was how everything happened.

I got carried away with the beautiful lady. At first I did not want anything intimate with Luna to occur. We exchanged number and she later left that night. It was the following day that our affair started and after each make out in my hotel room, I felt a load of guilt on my mind. We mate twice in my hotel room. I knew if i spend more time in Abuja, Luna will trap me down in her passionate web.

I have to find the courage to leave even before the main day I planned to leave.

When she called me, I told her that I have gone back to Lagos. She was not happy but I owe her nothing. I settled her well in those two nights that we spent together in bed and I try to put it all behind me.

Is almost a month since I met Luna and cheated on my wife.

Bisi did not know what happened, she welcomed me when I returned and made my best food and we had a great time together.

I hate the guilt feeling that clouded my mind as I thought of what I did with Luna but it was behind me now and nobody will know of it.

With this Bisi’s attitude, a lot of thought is crossing my mind.

What If she later found out about the affair I had in Abuja with Luna.

Is not possible. I was very careful and did not leave any trace for her to know what I did.

Something else is making her sad but definitely not the affair.

She complained to me about the washing machine and the gas cooker having fault and I told her I will call somebody to come and check of which I later did. I called the man and he said he will come over to the house ones he is done with the work he has at hand.

I guess before I will come back everything was fixed up because Bisi did not mention or company of anything again.

I do whatever she ask of me, what is the problem this time?

This is more reason I decided to go home on time today, maybe I will get the word out of her.

Luna in my home – final episode

Luna in my home – episode 9

Diary of a pastor's wife episode 1

Who Am I without you episode 17 – finale