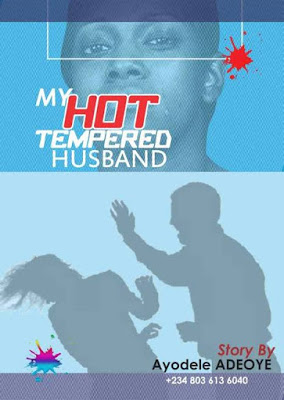 I am sorry Kemi, it was the devil that took over me that day. I know I’ve got a hot temper but I love you and that’s what matters now. Give me a chance to make it up to your family for the wrong I did to your late father and your family. I just need a chance to proof my love to you. Sorry for the death of your brother, of course if I knew the boy was in critical condition that day, I may not have reacted the way I did. I am truly sorry. He was truly remorseful in his words and actions but mama won’t accept that for the soul of her only son.

This anger in me was inherited from my late grandfather. From history, he was said to be cruel whenever he was angry. He could do anything to anyone if he is angry. I remember my dad too was hot tempered but he could control himself many times because he was a respected elder in church. I have seen him breaking glasses and gadgets whenever he was angry. His anger will only subside after he must have destroyed something or seen blood.

My grandmother told us many stories about our late grandfather when he was alive. He had a slave girl he bought from slave trade who became pregnant under his roof. We learnt he was so angry that he used hot knife to puncture the girls stomach in an attempt to abort the pregnancy. Her intestine gushed out and she bled until she died.

In another occasion, he caught a man sleeping with his daughter on his farm. He arrested the man and tired him on a mango tree for 5 days without food and water. On the fifth day his anger was not pacified so he set the man ablaze while he was hanging on the mango tree. He died screaming and wallowing in pain.

The third incident happened between him and his last wife. She was pregnant with twins when they had a misunderstanding with grandpa, the misunderstanding led to a serious fight between them, he beat her until she went into comma for three days. By the time she regained consciousness, she had lost her twins of seven months and two weeks. That thing really pained that woman so she became isolated and depressed. She never recovered again from this pain. On the day she was to die, she placed curses on my grandfather and his  descendants.

The Quirk of Fate – episode 4

Who Am I without you episode 13

THE MISERY OF MUTINTA : Episode 14