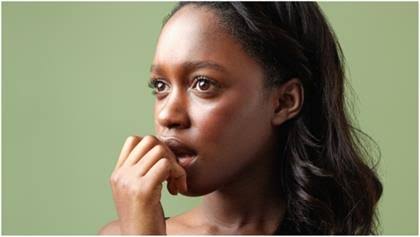 p-nting, I walked slowly towards her.
“touch my unmentionables’ she commanded. I did as I was told. She bent down a little bit and let my young hands roam over those succulent oranges, interminably brushing over those dark tubes. Then she removed my clothes, slowly one after the other until I was unclad. I felt somehow embarrassed at seeing my kini exposed in front of a girl like that. I covered it shyly. She promptly smiled at the sight of my tiny instrument.
“Lie on the bed”
Again, I did as I was told. I got on the bed and lay down on my back. She touched my kini with her right hand and started stroking. I felt s-nsations that no word could describe. She rubbed the head and then the s-nsations increased. My J-man became very stiff. She removed her p-nties and climbed on the bed with me. I saw the kitty. It looked like a red-hot valley of molten lava, nestled between two dark, swollen peaks. There was also pub-c hair, a lot of it. She asked me to touch her kitty. I obliged. It felt soft and slippery, I started rubbing it. I rubbed on the c–t. It felt like a moist, swollen rose bud in my hand. All the time I was having pleasant s-nsations and she was given low, soft mo-ns and commanding me to touch here and there or stick my finger here and there. I coulsn’t really understand the meaning of what was happening. All I knew was that I was enjoying it as she was also stroking my kin continuously. Suddenly, I heard a deep, serious, elderly feminine voice.
“Ki le n se nibi?” meaning what are you doing here.
I raised my head and looked up. I saw the landlady, Tosin’s aunt standing at the door, looking at us with blazing anger in her eyes—–

I went out and entered our apartment quietly. Mom was in the kitchen. I was so solemn that everybody was wondering what had happened to me. Well, they soon knew what happened when the landlady came to see my mother an hour later. I stayed in the bedroom with my sister while they talked in the sitting room. When she left, my mother called into her room and gave me a long lecture on s€×, its purpose and consequences. In the evening, we heard loud wails from the landlady’s apartment. I knew it was Tosin, she was being flogged. The realization that someone was being punished for what we both enjoyed made me feel somehow guilty. The following day was a Saturday. My parents took me to church to see a counselor. I was counseled about s€× and its evils. I was told that s€× is a sin, besides that, I could get someone pregnant or contact an incurable disease called AIDS. I started avoiding s€× since that day

Throughout my secondary school, I never even k-ssed a girl. I was strictly for my books, I didn’t care about s€× at all, it was the last thing on my mind. I had a few female friends but they were mostly reading partners or people I related with on a platonic level. No girlfriend. When we got to the S.S it became quite common for us to discuss the s€×ual escapades of some of our s€×ually adventurous colleagues. They would even boast of their prowess. In my final year, I caught out health prefect with an S.S 2 girl at the back of the dining hall, engaging in sinful pleasure. The girl was giving him a b—–b while the guy was gro-ning pleasurably. He begged that I should not report them and I should join if I wanted to. But I did not join them; I also didn’t expose them to the school authorities cos my sec school was a mission school with strict discipline and they would suspend any student caught in s€×ual act.
Immediately after my secondary school I was enrolled in a federal polytechnic. From the onset I decided that I would abstain from all acts of s€×ual intercourse. But I underestimated my environment and I was to meet more than my match on several occasions. It was in the polytechnic that I first became aware of how s€×ual I really am. Let me share some of my adventures in the polytechnic with you.

In my first year, second semester, there was this Edo girl in my class called Kate. She was fair in complexion, with portable sized body, well endowed both in from and behind. But I believed her best asset was her ass. She had it in abundance, not just in abundance but in the right shape. She wasn’t exactly beautiful but she was s€×y in a way because of her nice butts. After doing a few practical together, she decided I was intelligent enough and stayed in my group. She stuck to me and we started going to class together, we read together and did our assignments together. We were good friends. I had no girlfriend, she had no boyfriend but our relationship was strictly platonic, at least initially. So we had enough time to see ourselves without any jealous spouse pestering at the other end. She lived in a room in a building close to the campus while I lived in the hostel. She liked to hang around me, especially in the class. I didn’t mind because I enjoyed her company. She really was a nice girl, she was funny and witty and she could make me laugh when I was solemn. We started visiting each other’s rooms. She had this nasty habit of slapping my butts jokingly whenever I made a joke about her, that’s when we are in private. It felt weird cos I couldn’t slap her butt back because it would seem like I am not being polite to her or am abusing her as a lady. One day, we were in her room, playing as usual. I made a joke and she smacked me and tried to run for it. Somehow I drew her back and smacked her in her big, round butt. The smack was not so hard but it resonated in my hand as I felt the arse bounce in my arms. At that moment I can’t deny that I didn’t have any s€×ual feeling because of the contact. She turned around instantly. I look at her, scanning her face for signs of anger, waiting to hear the rebuke of my life.
Her reaction was astonishing!