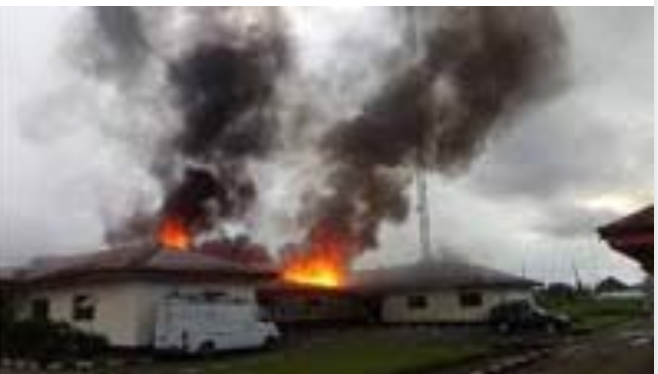 A septuagenarian and four of her grandchildren were at the weekend burnt to death in Biagbini, a riverine community in Ese Odo Local Government Area of Ondo State.

The aged woman identified as Mrs. Moyo Jide was said to be sleeping with her four grandchildren inside their room when the fire started and burnt the house and everything in it.

A source in the town gave the names of the deceased grandchildren who also died in the fire incident as Jennifer, Gbana, Big Daddy and Wisdom.

Two of the grandchildren were said to have been living with their grandmother since the death of their father a few years ago.

Although the cause of the inferno could not be ascertained, an eyewitness suggested the incident might have been caused by fire which emanated from the woman’s kitchen.

He said apart from their death, properties in the house were razed by the fire.

A resident of the community who craved anonymity said the fire started at midnight on Saturday while the deceased were asleep.

According to him “everybody in the community was woken up in the middle of the night when the fire started but there was nothing we could do to rescue the victims; everything in the house was destroyed.

“We are yet to know the cause of the fire incident, but we suspect it could be cooking fire that was not properly put out in the kitchen that caused the inferno because we use firewood here since there is no electricity in the community.”

He added that the matter had been reported to the police at Arogbo police division, while the bodies of the deceased had been deposited in hospital.

“We are yet to ascertain the cause of the fire incident but we have commenced our investigation in to the matter,” he said.

Reopening of schools, worship centres to wait in Oyo