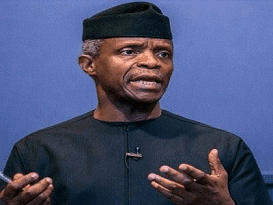 A company in which Vice-President Yemi Osinbajo has a stake, Simmons Coopers Partners, has been linked to another firm, Ocean Trust Limited, which was fingered in an alleged N100bn scam involving Alpha Beta Consulting Limited and Alpha Beta LP.

Ocean Trust Limited, which was accused of being a conduit for diversion and laundering of funds by Alpha Beta, listed Simmons Coopers as its company secretary, doc-ments exclusively obtained from the Corporate Affairs Commission by Saturday PUNCH showed.

Simmons Coopers was listed as a company in which Prof Yemi Osinbajo (now Vice-President) had a stake in his asset declaration form in 2015, according to the statement by the Senior Special Assistant to the President on Media and Publicity, Garba Shehu.

In a petition submitted to the Economic and Financial Crimes Commission in July 2018, Dapo Apara, the erstwhile managing director of Alpha Beta, had alleged that Alpha Beta owed the Federal Government N100bn in unpaid taxes spanning over 10 years, adding that the firm usually laundered funds through another firm, Ocean Trust Limited.

He alleged that the firm was being protected by powerful politicians. The petition by Apara’s lawyer, Adetunji Adegboyega, read in part, “Over the years, the company (Alpha Beta) has been protected and shielded by some powerful politicians and people in the society which made them to always boast of being untouchable.

But our client, feeling the need not to keep quiet again and strengthened by his belief in the fact that the government of President Muhammadu Buhari is keen on fighting corruption which has been the bane of our country, is of the firm view that it is time to expose and open the can of worms called Alpha Beta Consulting

Our client is of the firm belief that it is time for the commission to step in and conduct a holistic investigation into the activities of Alpha Beta Consulting Limited and Alpha Beta LLP with a view to uncovering the massive corruption, money laundering, tax evasion, etc., going on in the company. “Kindly note that one of the companies being used to perpetrate money laundering by the company is still another company named Ocean Trust Limited.”

Osinbajo’s reaction When contacted on the relationship between Osinbajo’s firm, Simmons Coopers and Ocean Trust, the Senior Special Assistant to the Vice-President on Media, Mr Laolu Akande, said he would not comment on the matter unless Saturday PUNCH showed him the doc-ment indicating Simmons Coopers was Ocean Trust’s company secretary.

But, a source close to Osinbajo told Saturday PUNCH that “the Vice President has since 2014 left the firm. There is no interest there anymore.” The source added, “And I think you should talk to the EFCC about its own decisions. It does not make sense that the EFCC will say it is not prosecuting or, as you say, investigating or probing (the allegations) because of what you claimed.”

However, Osinbajo in 2015 listed Simmons Coopers as one of his companies in his asset declaration form. Where is Ocean Trust? Saturday PUNCH, which investigated Ocean Trust Limited for three months, conducted a search at the Corporate Affairs Commission. It was noted during a CAC search that the firm was registered with number 419706 on January 5, 2011, and is located at 684, Idowu Taylor Street, Victoria Island, Lagos and had Gboyega Iyiola and Kunle Akinniyi as shareholders at the inception both of whom relinquished their shares two days later on January 7, 2011.

One of doc-ments exclusively obtained from the Corporate Affairs Commission Incidentally, the property where Ocean Trust Limited is located shares the same address with the office of former Governor Bola Tinubu of Lagos State known as ‘Freedom House’.

All efforts to contact Ocean Trust Limited proved futile as investigations by Saturday PUNCH showed that the company might no longer be in operation. Also, attempts to speak with its management turned out to be a wild goose chase. When one of our correspondents visited the company’s address at the Freedom House, Plot 684, Idowu Taylor Street, a fair-complexioned lady, who said she was an employee of Ocean Trust Limited, told Saturday PUNCH that the company was no longer located there. When asked if it was true that the firm was being used to launder funds for Alpha Beta, the lady, who refused to identify herself, asked our correspondent to send an email which she would forward to her boss.

Over three weeks after one of our correspondents sent her an email, a response was still being awaited as of the time of filing this report on Friday. A visit to Ocean Trust’s second listed address at 42 Norman Williams Avenue, Ikoyi, Lagos yielded no positive result as the compound looked des**ted having been overtaken by weeds. Another doc-ment obtained from the CAC … Saturday PUNCH met with a lady, who simply gave her name as Blessing, and confirmed that the place was being used by Ocean Trust. She, however, said she could not speak on any issue as the place was only a correspondence office.