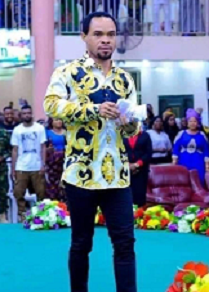 Controversial popular Anambra prophet, Odumeje, fondly called “The Lion or Liquid Metal,” has set Monday, August 19, 2019, to walk on water just like Jesus Christ did in the Holy Bible.

Prophet Odumeje, who is the director of Mountain of Holy Ghost Intervention Deliverance Ministry, an Onitsha based church, informed his congregation of his proposed plan during one of the services recently.

It was understands that the sleek cleric, who is known for conducting what many describe as ” on his members, will try to replicate Jesus Christ “walking on water” miracle at the River Niger and has invited journalists to come and cover the event.

Meanwhile, Prophet Odumeje will not be the first cleric to attempt to replicate Biblical miracles in Africa and Nigeria at large.

In 1991, a Nigerian preacher, Prophet Daniel Abodunrin, was mauled by lions in Ibadan zoo, Oyo state, southwest Nigeria, when he tried to replicate the Biblical miracle of Prophet Daniel who was thrown into the lion’s den and came out unhurt.

It was learned that the self-proclaimed Prophet ignored warnings from zoo keepers and walked into a den full of lions where he met his waterloo.

Reports say the Prophet, with a crowd of people watching, put on a long red robe and proceeded to enter the cage full of lions and was ripped from flesh to bone within seconds of entering the den.

Like late Prophet Daniel Abodunrin, Prophet Odumeje, whose church is usually graced by top Nollywood actors and producers, is set to replicate the “walking on water” miracle performed by Jesus Christ.

TEARS OF A HELPLESS WOMAN (episode 3)