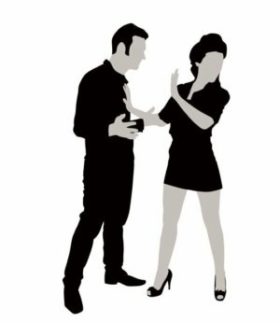 He bypassed me into the doctor’s office. He seemed so busy and full of pride and arrogance. That was the second time I was seeing him.

The first time I set my eye on him, I convinced myself that he was the main reason why the devil was at work. Who would let go off such a man? I didn’t take note of his finger until this particular day.

He refused to answer me, but rather sat on the doctor’s seat and asked that I go out and call the first person in. What! He was a doctor?

I shamelessly walked out and called whoever was to go first. As I sat down, I thought of how I was going to face him and tell him what my problems really were.

“Next?”, he shouted from his room. I was lost in thoughts. “Madam, aren’t you the next person?,” a young boy who was sitting behind me asked. “Yes yes,” I responded as I got up from my seat and walked to the consulting room. “You can have a seat,” he said without looking at me.

I sat down and for some seconds, I didn’t know where to start from. I think I got a plan. I can have him use his hand around my genital area. “Doctor, I feel some pain in my genital area each time I try ins**ting my finger. I also experience some pain when urinating,” I said. He wrote some things down, gave it to me and told me to go to the laboratory. What? I thought he would try doing something, which was the main reason why I gave him those complains.

“Doctor, please that’s not all. There is this pain in my lower abdomen. I feel there is something there,” I said.

He looked at me sternly and asked, “okay, are you pregnant?”

“Eeeiii doctor! It’s been long since I last had intercourse,” I replied. “Very well. Take off your slippers, lie on the bed and raise your dress. I will gently press your abdomen so that you tell me where the pain is,” he said.

I jumped unto the bed before he finished with his statement. I wasn’t in any shorts aside my p-nt. I’ve finally succeeded. I raised my dress, exposing my white coloured p-nt and a few pub-c hair which decided to escape from my p-nt.

“I will write some drugs for you to take at the pharmacy. As for the pain you claim to be having, it’s not advisable to ins**t your finger since you introduce microorg-nisms in there. You also need to keep your genitals clean. Very clean I mean. Don’t leave your pub-c hair growing this much okay. Shave when necessary, if possible, every two weeks,” he said.

I wish you understood what I went through at that moment. It was really embarrassing. I got up and went home without going for the medications.

I got up and went home without going for the medications. “Who the hell did he think he was? No… But come to think of it, he was really handsome. I’m sure he knew that he was handsome or perhaps, some ladies have made it known to him. Oh my goodness! I lost it this time around. I thought I got whatever my heart yearned for, but why this time? I must win him at all cost.”

While thinking about this doctor, my guy called. I didn’t refuse it. Why would I refuse his call because of a damn doctor who didn’t have any feeling for me. I picked up and realized that was his auntie. I was a bit surprised because Quaku never told me his auntie (bro’s wife) would be visiting. He always spoke to me about his big brother and the wife but I had never had the chance to see any of them or their pictures.

I didn’t hesitate when she asked that I come over the next day. I was so happy. At long last, I was going to meet my in-laws since his parents were no more.

It seemed daybreak was rather slow that time but it had no option since it was an agreement between itself and nightfall.

I couldn’t sleep well. I turned on the light, checked the time and realised it was 5:17am. I rushed to the bathroom, washed down and came back to lie on my bed. After some time, I got up from the bed and jumped into my very simple but nice outfit. I checked the time and it was already 7:21am.

I rushed out, picked a cab and headed straight to the main station to get a car to Tafo.

It seemed she was expecting no one aside me. She mentioned my name the very moment I pressed the doorbell. Though we hadn’t met before, she made it look simple. She gave me a warm hug and led me to the dining table where lunch was already set.

“Hei, you looking for your love? Don’t worry,he will be with us in a jiffy”, she said as I kept throwing my eyes at every corner.

I rushed to meet him when I saw him descend the staircase. I couldn’t deny him of his ‘I miss you’ k-ss since I had never denied him of that. I actually forgot his sister in law was around until she cleared her throat. I apologized and took to my seat. She asked that we all served ourselves. I dished Quaku’s food, and then dished mine. I knew just how much he could consume.

I had lived with Quaku for a year and a half, yet his class never faded. He always had a different look. One thing I didn’t like about him was the consistent denial of s€×,with the excuse of completing school before indulging in anything of that sort. What was wrong with s€×? Tell me. Come on,somebody tell me.

After we had finished eating, we all spent some quality time at the hall together. I kept wondering why she asked me to come over. Did she want Quaku to excuse us? I was getting tensed. She finally broke the silence. She had wanted to meet me and know who Quaku was dating. That I  guess was a great moment of relief.

The rough and gentle night