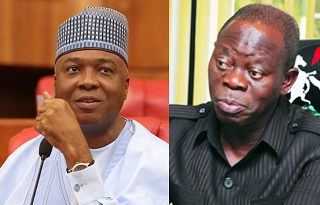 The National Chairman of the All Progressives Congress (APC), Adams Oshiomhole, has described former Senate President Bukola Saraki, as the smartest political player in Nigeria.

The former Edo State governor, however, insisted that he showed more smartness in orchestrating Saraki’s defeat.

Oshiomhole made this known while speaking to State House correspondents after meeting with President Muhammadu Buhari at the Presidential Villa on Monday.

“Remember I was saying that Saraki must be removed, people would say how would I do it? I said okay if he resists removal then we would uproot,” he said.

“We went to Kwara, we did Otoge, we uprooted Saraki and you cannot commend me for this? Do you know who Saraki is? If you are talking of the most smartest political player, seasoned smart guy, he is. But for every smartness he has, I have a superior smartness.

Everything in Kwara is APC and you can’t commend me for that? “If you don’t, then I will be like the lizard, I will praise myself if you state house correspondents don’t praise me.

On The Lioness Tail

On the lioness tail episode 16

My life at thirty episode 28

My only sister episode 30

Terrors Of the Past 2 episode 2

What does my husband want episode 8

A date with the devil episode 3 – finale