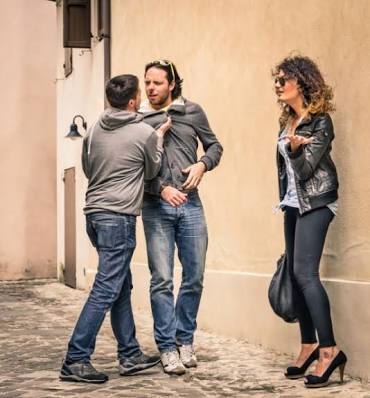 “I don’t know what do anymore man, it’s hard for me to move on. the past week has been the longest and most lonely week of my life.

She wouldn’t accept me and I don’t know why am so sad when I somehow knew she wasn’t going to agree.

It was hard enough to beat my brother to the bet when he was alive, now that he’s dead it’s even harder. You can’t compete with the dead my man. Am so foolish I should have kept quite. ” Jack complained to his friend.

Hilary looked at him and sighed.” I don’t know why you guys are making a big deal out of this. It’s simple you love her and your brother knew that, he recommended you two got together, so what’s all this.? That girl wants you and she knows how you feel about her. come on, she can’t tell me she hasn’t noticed how you have stayed by her side all these months. ”

“I don’t know Hilary, if she liked me she could have agreed to be with me. I guess she’s still holding on to my brother and theres nothing I can do about it. I think it’s high time I moved on ” Jack added.

“I have to accept things as they are and try to ignore what I feel, ” he sighed sadly.

He had rented an apartment awaiting his house to be completed. He had a contractor who was to complete building his house in 2 months.

The whole week Jack never called Lucy directly. He would call home and ask his mother how Lucy and baby James were doing.

Jack went back home that evening as he forced himself to work beyond his normal time ensuring that he got tired so that he could just fall asleep without thinking so much about the situations surrounding his life.

He took a quick shower and got in his bed closing his eyes. His mind wild back to the day he last spoke to his mother before he left the farm.

“Am going back home mama, I need to go for work. ” he told his mother.

“My son, I know this is not easy for you but running away every time you have a challenge is no good for your well being.” she told him.

“I know this is about Lucy and once again you are running away from her as you did before she even got close to James. Don’t you ever think if you had stayed and showed her what you really felt you could have ended with her already?” She asked holding him and leading him to sit on the kitchen table.

“Mama, I don’t know what to think anymore, she doesn’t want me and you have no idea how much that hurts mama. I wish i never fall in love with her” he scoffed his hands holding a cup of coffe his mother had given him.

“Am sure she thinks am just taking adavantage of the fact that Jammy is gone and she thinks the moral grounds won’t allow her to be with me. I don’t know why it has to be so hard to find love mama, I swear my heart will burst if I stay here any longer. I can’t even face her after what happened yersterday. I think it’s okey to run away than to live with her I might end up making some mistake I will regret. ”

His mother looked at him. ” I wish you were happier sonny, I lost my other son to death and I can’t loose you to a life of loneliness and pain. I just hope you will do just fine” she tried to smile touching his chin and lifting his head.

He looked at her and asked,

“Jack, listen to me. It’s now that things have changed because of issues of sicknesses and the coming of New cultures in our country, otherwise some of our traditions for example the same Tonga tribe for Lucy, they could let the brother or cousin to a man who died take the wife of the late and marry them. The trend was to avoid letting the children suffer they wanted someone to help take care of the children of the late and it worked for them. Now the changes in this modern world discourage that.

The fact that you love her and your brother asked you to doesn’t make this any hilarious at all. If you ask me I would tell you, go on and be with her. Not for the baby only but for your heart. You love her and that is beyond any tradition and the views of the world. ” She added with a smile.

“Wow, mama the way you have said it just makes everything seem so simple. But unfortunately Lucy doesn’t see it in those lines.

Anyways,” he shrugged standing up. “I guess things were not meant to be. And so to forget her am moving away, Try concetrate on my life and see how far I can go” he added pecking his mother to say good bye. He rushed to his father’s bedroom and said his good bye and left before Lucy was up.

So now here he was alone and sad But without any alternative.

Months passed and he was called one day by Lucy since sometimes he would call her and ask her about the child without any long conversations.

Lucy had wished Jack would say more than just greetings to her. Wishing deep in her heart he would ask her again to be with him but over time she realised Jack never even mentioned the topic.

She felt bad that maybe he had moved on and it was her fault she pushed him away.

She came to realise that the gap between them made her realise she had fallen for him more than she had ever imagined to. Sometimes she would feel guilty she was cheating on James even when her love story with him wasn’t the amazing one. But the desire to be with Jack grew stronger every day and she longed to see him again.

” But how do I get to tell him this? ” she asked herself every time she would call or recieve a call from him.

He had been sending things especially toys and clothes for baby James through the driver but he never went back to the farm.

“Hey Jack how is your day?” She asked him.

“It’s okey just a bit tiring I had a chain of presentations today and am so exhausted” he added with a sigh.

“Yeah he is Jack, that’s why I called you. He’s turning 1 year old this Saturday and we want to do a small birthday-party">party for him to celebrate his birthday. Am asking if you will make it here” she asked her voice almost shaking at the thought of seeing him again after almost 7 months.

“Oh so soon? days are really moving, the last time mom came here with him he was just 8 months old ” he answered.

“I don’t know Lucy, I would really love to come but I don’t know. It’s just that I have this meeting in South Africa with one of our suppliers and I won’t be back till Monday.” he lied rubbing his head like Lucy could read his thoughts.

He wasn’t going to face her again. Knowing for sure seeing her would make him go crazy again.

“Oh too bad then, ” Lucy responded.

” alright then will talk to you later,” she told him before cutting the line.

She threw her phone on the table and frowned sadly. “He’s not coming?” Victor asked her.

She had gone back to work after she convinced Mr Kangwa she needed to do something instead of just staying at home.

“I wonder why you still purnishing yourself Lucy, if I were you I would go and tell him the truth. Just look at you, he’s all you talk about.you love him but too sacred to speak out. Go on and start living already. Life is too short to live it in sorrow and regrets.” Victor added.

She sighed and leaned back on the chair. “I don’t know if I have to do this Victor, it’s been 7 months and he hasn’t said anything to me. What if he’s moved on? Am scared I won’t survive being let down again. I can’t fall in love again and end up heart broken. ” she sighed shaking he head.

“What is better ? beating yourself up here or finding out for sure if he still wants you?” Victor asked.

Lucy went to bed that evening and took her time analysing everything. Victor was right it would hurt her more of she wouldn’t try her chance with Jack. She loved him and she knew what she felt was deep.

“Sonny, come here!” She called her son who walked in holding his toy . Baby James stepped forward to his mother and she lifted him.

“Am going away tomorrow , I have to see your father” she smiled at him.” Am sure you would love to be with him too right?” She asked kissing his chick.

James smiled and played with his toy. She placed him down feeling so excited.

“Mom, am going to town tomorrow will you watch over Jammy? ” she asked Mrs Kangwa.

“Of course my dear, he’s my grand son and you need not ask for my permission. Go for days if you want” Mrs Kangwa teased “he will be fine. ”

“I know, ” Lucy smiled. “He has the best grand parents in the whole world. ”

“Lucy!” Mrs Kangwa calls her back as she walked away.

“Yes mom, ” she answered turning back.

“Will you carry some lamb meat for Jack tomoro? I left some pieces for him from the one they were selling last week. ”

“Yes i will do that mom, no problem” she smiled, happy that she would at least have an excuse for going to see him…

I'm in love with an Housemaid episode 9

In love with the hijabite episode 5

In love with the hijabite episode 8