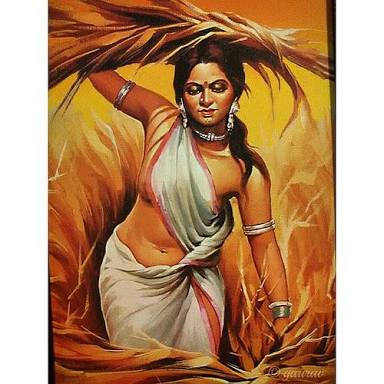 …Then I settled in my new home with hope that things would move fine and my madam won’t have any reason to send me home prematurely.
A severe lash of cane sent me hurrying to my feet the next morning.
“So you’re still sleeping?” My Madam asked looking ferociously at me. “So you’re still sleeping by 7 am?” She repeated lashing out two more strokes of the cane. “Who are you waiting for to clean up the mess in the kitchen and sweep the house?” She asked.
“I’m sorry madam,” I sobbed.

“Come on, go and do your morning function!” She barked as I ran out of the room and into the kitchen.
*************************************
It wasn’t my fault that I woke up late that morning.
I had overworked myself the previous night clearing up the dishes that was used in preparing and serving the meal for the night.
By the time I finished and went to bed, the night was far gone.
I sobbed as I washed the remaining dishes in the sink and swept the entire house.

“Make sure you fetch water after sweeping that thing,” my madam’s harsh voice reminded me from the bedroom.
“Yes madam,” I replied hurrying up.
The buckets I used in fetching water were those big buckets that were so heavy that I never attempted to fill them to the brim.
I was to fill one very big drum in the front verandah with another at the back.
For more than 3 hours I ferried the buckets from well to drum and back.
By the time I finished, I was very hungry and exhausted.
My madam gave me two slices of bread and a cup of mixed water in the name of tea.

The mixed water was tasteless, hot and almost burned my tongue in the first sip.
My madam was married to a well to-do husband and they already had 3 kids the last of which was very tender.
It was obvious that she was the one I came to babysit.
The other two – a boy and a girl – were much older but still needed certain degree of babysitting like bathing them and washing their clothes and even feeding them as at when due.

But then the tender baby gave the biggest trouble. She cried a lot and more often than not always put me into trouble.
With only two slices of bread and mixed water in my tummy, I carried the baby about trying as hard as I could to quell her cry.
“Why is that baby crying?” My madam asked walking into the sitting room.
“I don’t know madam,” I replied with terror. A very hot slap landed on my right cheek and I nearly dropped the baby out of pain.

“What did you just try to do now?” My madam asked advancing ferociously towards me.
“Please I’m sorry madam,” I pleaded sobbing.
The raised voice of my madam coupled with the sound of the slap further increased the baby’s crying and my madam took her from me.
“Come on, go and put hot water on the fire for her pap!” She thundered and I ran into the kitchen in obedience…

THE MISERY OF MUTINTA - Episode 1

THE MISERY OF MUTINTA : Episode 3

THE MISERY OF MUTINTA : Episode 15

THE MISERY OF MUTINTA : Episode 5