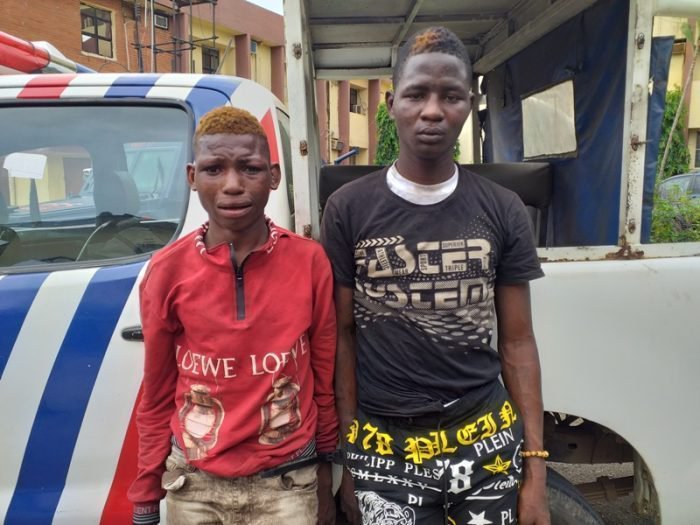 more stories @ toriperi.com
A traffic robber who swallowed his victim’s wedding ring after threatening to kill her along with three other suspected traffic robbers has been arrested by the operatives of the Rapid Response Squad (RRS) of the Lagos State Command in Oshodi and CMS part of the metropolis.
The ring swallowing suspect, Taofeek Adebayo, 19, along with an accomplice, Toheeb Tijani, 20 were arrested in Oshodi – Oke shortly after dispossessing two ladies occupying a grey Sienna bus of a gold earring and a set of wedding rings.
The two other suspects, Samson Oluwa, 20 and Michael Amodu Adamu, 22, were arrested in an all-night sting operation in CMS.
Adebayo, in company of his gang had on Friday June 14th, pleaded with two gorgeously dressed ladies in a Sienna to assist them with money for food in traffic. The two ladies extended a N100 note to them, which the suspects instantly rejected.
According to the driver of the Sienna, who pleaded for anonymity,
“My colleague and I were coming from Anthony and heading to Ilasa for our association’s meeting. Three of them (pointing to the suspects) came near our vehicle. There was traffic and we could not turn anywhere. We were scared. They said we should give them money for food. I reach out to my colleague to give me money. She gave me N100 which I gave them. They rejected it. One of them said, ‘eleyi ki I se owo ti wa’. I told them this is what I have. One of them pulled my left ear and removed my earring. Two of them turned to the other side of my vehicle. They threatened to waste us if we don’t give them money. ‘Where is the money’, they screamed at us. In a hurry to leave our car, they forced my friend to surrender her wedding ring. This yellow guy (pointing to Adebayo) took the first one and swallowed it in our presence. His colleague took the other one”.
When interrogated, Adebayo said
“I swallowed it but I have vomited it and handed it over to Young Boy, he was the third guy when police were chasing us. I told him to hand over the rings to the ladies so that the police can release us but he absconded with the two rings and earring”.
His accomplice, Tijani, who according to reports, was on the watch list of police for snatching a mobile phone from a commuter in traffic earlier in the day stated, ‘I have released the phone to the LASTMA officials standing in Oshodi Oke. They told me that RRS officers were looking for me to arrest me”.

The two other suspected traffic robbers were arrested around Friday midnight when they were robbing a stranded motorist around CMS, Lagos.
Commenting on the development, the Commissioner of Police, Muazu Zubairu stated that the police would not relent on its efforts towards making Lagos safe for law abiding citizens. He directed that the suspects be transferred to Makinde Police Division, Oshodi and SCID, Yaba.

Only in your memory episode 7