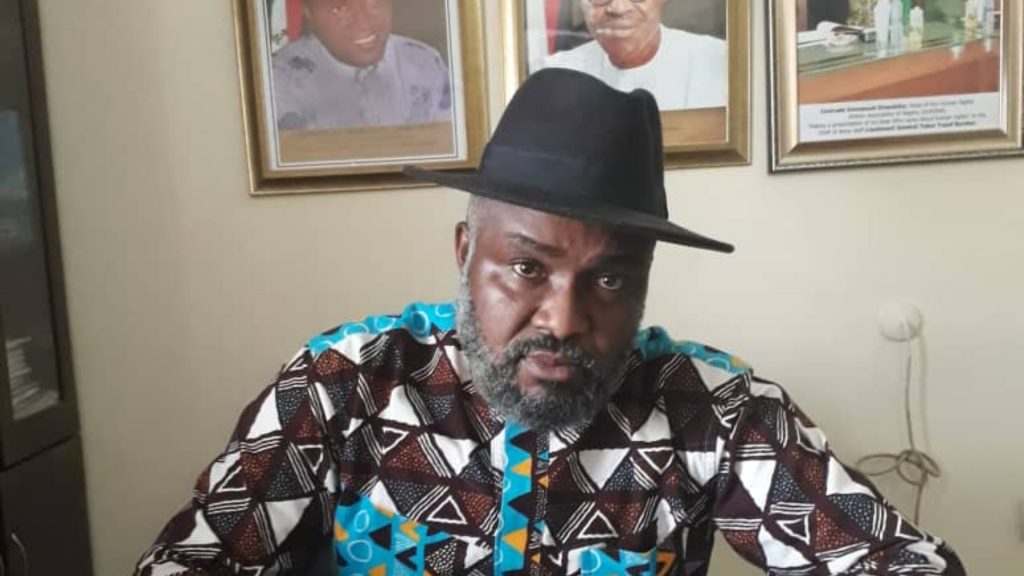 HURIWA warned of the dangers of criminally profiling youngsters by the Economic and Financial Crimes Commission, EFCC, “even when big time rogues who robbed their respective states of multibillion dollars are walking the corridors of political powers only because they are bargaining chips of President Muhammadu Buhari’s administration’s tyrannical plots to establish totalitarianism.”

In a statement forwarded to DAILY POST by its national coordinator, Comrade Emmanuel Onwubiko, HURIWA condemned what it termed the unconstitutional termination of the multibillion Naira alleged theft case involving former Gombe State GOVERNOR Danjuma Goje only “few days after he was blackmailed to step down for the official candidate of President Muhammadu Buhari’s administration for the Senate Presidency position in the person of Senator Ahmed Lawan.”

The Rights group stated that the decision of the Federal Attorney General and Minister of Justice to assume jurisdiction over the matter and to take over the prosecution from the Economic and Financial Crimes Commission (EFCC) with the clandestine decision to terminate the matter amounted to abuse of power and the highest display of the active connivance of the Federal Government to perpetrate corrupt practices, tolerate abuse of power by those who are willing to be used as political pawns in the chessboard of political contestations and this has violated the kernel of constitutional norms which obliges government to end abuse of power and fight corruption.

The statement reads: “THERE IS NOT A SINGLE PUBLIC INTEREST PURPOSE FOR THE UNILATERAL DECISION OF THE FEDERAL ATTORNEY GENERAL WHO WAS NOT EVEN IN THE OFFICE AS AT THE TIME OF CITING THIS PROVISION OF 174 BY AN OFFICIAL OF THE JUSTICE MINISTRY TO INVOKE THE POWER OF NOLLI PROSEQUI AS ENSHRINED IN SECTION 174 OF THE 1999 CONSTITUTION OF THE FEDERAL REPUBLIC OF NIGERIA of 1999 (as amended). First and foremost, the exercise of the powers of nolli prosequi by the Federal Attorney General and minister of Justice must be grounded on the demand of public interest. The termination or even subtle suspension of the prosecution of the former governor of Gombe State is a flagrant disregard of the constitutional safeguards and has absolutely rubbished any claim of a genuine fight against corruption by the current administration. Who was in office as Attorney General to have validly exercised the power last week’s Thursday when Nigeria has no Attorney General of the Federation?

“WE IN THE HUMAN RIGHTS WRITERS ASSOCIATION OF NIGERIA (HURIWA) are shocked to read that the Federal High Court sitting in Jos, Plateau State, had quashed the remaining two counts charge preferred by the Federal Government against a former governor of Gombe State and serving senator, Danjuma Goje, over allegations of corruption. WE TOTALLY CONDEMN THIS POLITICAL AFFRONT AGAINST CONSTITUTIONALISM AND THE DEPLOYMENT OF THE POWERS OF NOLLI PROSEQUI TO SERVE THE SELFISH POLITICAL INTEREST OF PRESIDENT MUHAMMADU BUHARI ONLY BECAUSE GOJE ACCEPTED TO STEP DOWN FOR AHMED LAWAN SO THE LATTER CAN BE RAILROADED TO BECOME A PUPPET AND SURROGATE SENATE PRESIDENT THAT WOULD PLAY THE POLITICAL CARDS OF THE EXECUTIVE ARM OF GOVERNMENT.The Office of the Attorney-General of the Federation was said to have applied on to terminate the prosecution of a matter that the Economic and Financial Crimes Commission had since 2011 filed a 21-count charge against Goje, but 19 of the charges were struck out in March 2019, leaving only two counts.

“The presiding judge, Justice Babatunde Quadri, had while ruling on the “no-case” submission filed by Goje through his lawyers on September 14, 2018, discharged him and other defendants on 19 of the 21 counts. He held that the defendants had a case to answer on counts eight and nine and ruled that they should open their defence on May 8, 2019. The political softlanding granted Goje by President Muhammadu Buhari’s administration is a direct confirmation that there is a sinister plot to pursue only petty criminals made up of youngsters whilst the highly politically exposed top Nigerian politicians who have identified with the ruling All Progressives Congress have since been granted softlanding and declared as SACRED COWS WHO MUST NEVER BE TOUCHED BY THE EFCC OR ICPC. This is the obituary of anticorruption crusade.”

HURIWA recalled that Goje has stood trial along with a former Executive Chairman of the state’s Universal Basic Education Board, Aliyu El-Nafaty; and S.M. Dokoro for an alleged N5bn fraud. A fourth defendant, the ex-governor’s cousin, Sabo Tumu, who is now late was removed from the charge sheet. But as a result of political negotiations to cajole Goje not to run for the office of Senate President against the anointed candidate of President Muhammadu Buhari’s administration Ahmed Lawan, the Office of the Attorney-General of the Federation with no occupant took over the case filed against the former governor from the EFCC on June 7, shortly after he (Goje) agreed to step down for Ahmed Lawan in the race for the position of the Senate President. And in his ruling, the judge said pursuant to Section 174(1) particularly sub-section (b) and coupled with Section 108 (2) of 2015, “the application by the AGF to withdraw the charges is hereby granted.” “The accused persons are hereby discharged,” the judge held.

HURIWA also condemned the “current demonization of young Nigerians engaged in petty crimes of advanced fees fraud who could have been tried making use of the non custodial sentencing provisions with the underlying objectives of retraining them to abandon the wrong ways and become better citizens but there is a highly organized policy to criminally rubbish majority of young Nigerians to render them constitutionally useless and irrelevant to mount serious political challenge to wrestle political power from these old brigades who are deeply entrenched in the practices of highly organized economic crimes and the misuse of public funds to maintain their hold on political powers by all means.”

Girls In The Boys Dormitory Batch 14

My bestie my crush episode 1

In Love With A Prostitute – episode 3

Do not open episode 9